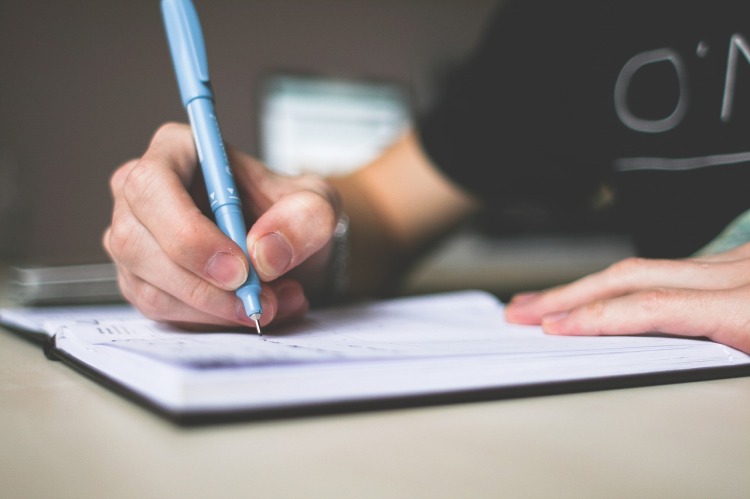 It’s been a frantic week as we’ve had builders working on the house.

‘The noisy one’, was sent home from school with chronic earache and ‘The bitey one’, is teething and as a result, extra bitey. He has also become a fan of early wake up calls, the most recent being 3am.

So I apologise as this may well become Five for Saturday which really doesn’t have the same ring to it, but at least my intentions were good and my caffeine levels high  🙂

I’m currently knee-deep in editing my novel and really enjoying it, even if I am lacking a little in time and focus.

I began reading my draft I’d completed in November during NaNoWriMo. This brought me to the horrible conclusion that I’m a terrible writer and should probably take up woodworm breeding as I seem to have little talent for anything else.

Therefore, I decided I would make this week’s Five for Friday about,

5 Things to avoid when Writing a Novel.

1. He grinned, he shrugged, he smiled…

Apparently I seem to write first drafts full of these. Everyone is shrugging, grinning and smiling at each other so much that it’s a wonder they haven’t all been committed. All that’s missing is a little maniacal laughter a maybe a shopping trolley full of tins.

Don’t do it. It’s not clever. It’s repetitive and lazy writing. Instead hit yourself on the head with your keyboard twice and go lie down with a damp flannel over your face.

2. She decided to run as he would probably kill her.

Okay, this one’s a little clunky, but you get the idea. I see this a lot and it’s just bad, bad, bad.

NEVER warn the reader what’s going to happen before it happens. It’s annoying and WILL result in me flinging the book across the room, or, if it’s my kindle, trying to close the page down, miss, and end up hitting the screen repeatedly like some kind of zombie typist.

…and a number of other weasel words.

If you ‘d like to see a list, that’s by no means exhaustive, take a look under ‘Writer’s Resources’ on my page.

My first drafts are littered with these and I pull out every single one unless they are absolutely necessary. Especially ‘Suddenly’. This word should be tied to a chair and left watching re-runs of ‘Keeping up with the Kardashians’, until it’s very sorry.

I have read so many kindle books where the words stop abruptly and begin again half way down the page, or they have large random spaces between words like the book suddenly forgot what it was talking about.

Go through your book again and again. Re-check when you add it onto kindle and then bore all your friends to death by making them check it too. It’s worth it.

5. I don’t know/I think you should/Why is that?

There’s nothing worse than wading through a page long conversation between Data from Star Trek and The Terminator, or worse, a book full of characters that ALL sound the same.

I have a wonderful acting friend who helps me with mine. She runs through it over the phone or highlights potentially hazardous wording via email and returns it to me, accompanied with a recent entry to the Eurovision Song Contest, to teach me a lesson.

Either way, read through all your dialogue out loud. Get a friend to read any opposing parts and it will become clear where needs work.

That’s it for today. It’s now 1am and officially Saturday.

Thank you so much for reading, and good luck to anyone else on the long road to Editville.

Have a great day and Happy Writing!

A community for writers to learn, grow, and connect.

Tales of humour, whimsy and courgettes

The Art and Craft of Blogging